SACRAMENTO, CA (February 11, 2019)—Dr. Elaine Batchlor, who as CEO of Martin Luther King, Jr. Community Hospital (MLKCH), brought high-quality healthcare to a Los Angeles community with some of the worst health indicators in the nation, will be awarded the James Irvine Foundation Leadership Award in Sacramento today. The prestigious prize, which comes with a grant of $250,000, recognizes “innovative, effective leaders whose breakthrough solutions to critical state challenges improve people’s lives, create opportunity, and contribute to a better California,” according to the foundation. Dr. Batchlor is one of five Californians—all women—to receive the Leadership Award in 2019.

"It’s not enough to provide healthcare. It is a medical and social imperative to provide excellent healthcare. South LA is an area that has been traumatized, marginalized, and medically neglected for decades. Our hospital’s focus on quality and access is perceived as an act of social justice.” – Dr. Elaine Batchlor, CEO, Martin Luther King, Jr. Community Hospital

“We are heartened and inspired by the work of these innovative Californians,” said Don Howard, President and Chief Executive Officer of The James Irvine Foundation. “California’s challenges can sometimes seem insurmountable, so it’s an honor to celebrate these exemplary leaders and elevate the solutions that are improving lives across the state.”

Starting in 2010, Dr. Batchlor spearheaded efforts to open a new, state-of-the-art, 131-bed community hospital in South LA to serve a majority Medi-Cal population. Since its opening in 2015, MLKCH has received accolades for its high patient satisfaction levels, cutting-edge technology, and commitment to providing high quality healthcare both within and outside the hospital’s walls.

Dr. Batchlor, a native of Maryland who received degrees from Harvard, Case Western Reserve, and UCLA, was hired in 2010 to lead the effort to bring a hospital back to South LA after the closure of a public hospital, King-Drew Medical Center, in 2007. Dr. Batchlor was one of the leaders of a unique public-private partnership in which Los Angeles County funded the new hospital’s infrastructure, UCLA offered physician staffing, and the hospital itself was governed and managed by a private, nonprofit team.

Key to Dr. Batchlor’s success has been her insistence that MLKCH provide not just good care, but care on par with that provided at hospitals in more affluent areas. 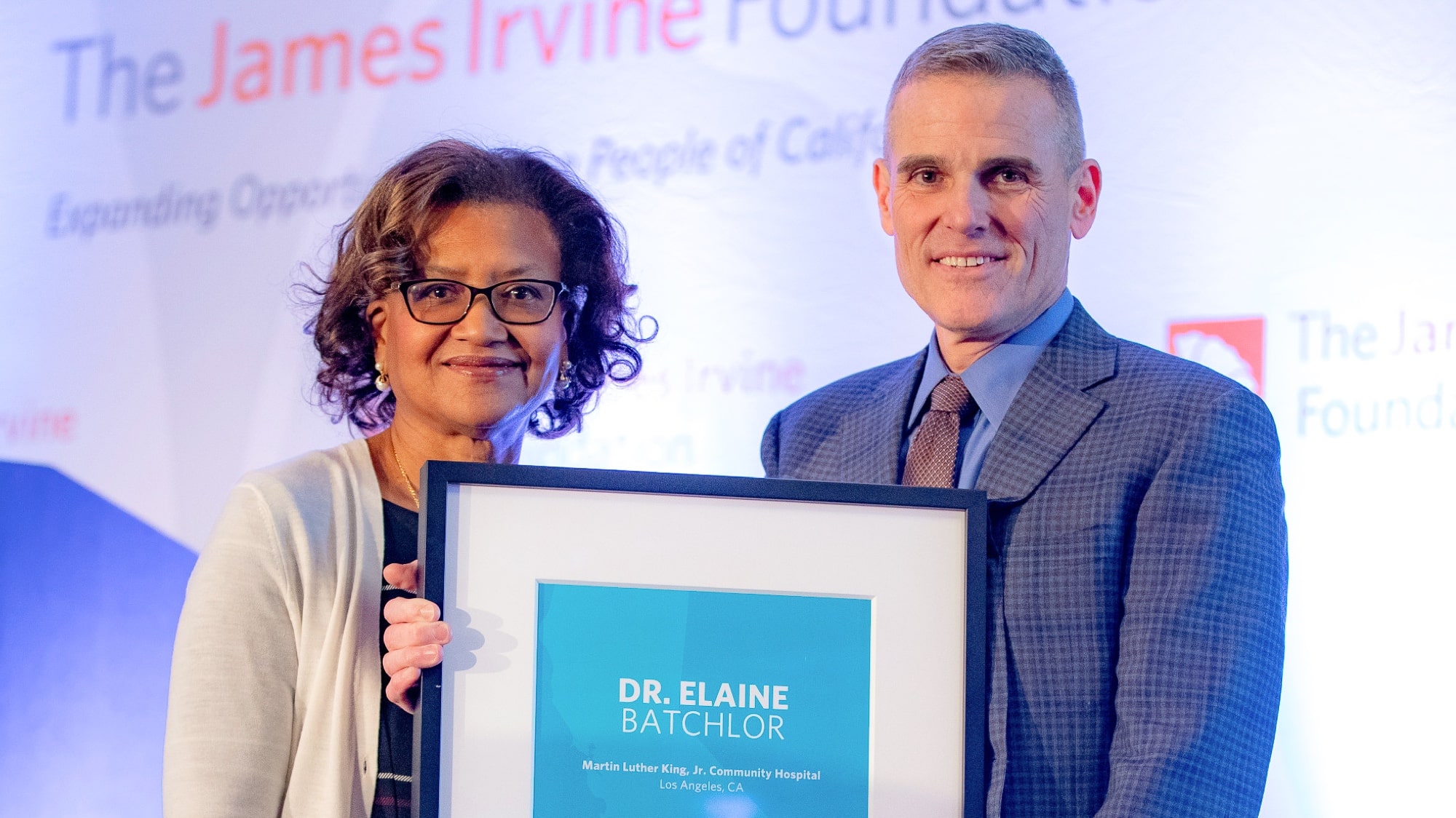 Among its accolades, in 2017 MLKCH achieved HIMSS-7, recognizing the highest level of use of health information technology to provide quality care, achieved by only 6.4% of hospitals nationwide that year. It also has one of the lowest C-section rates in the state. In 2017, Politico called MLKCH “the hospital of the future.”

Before assuming the helm of Martin Luther King, Jr. Community Hospital, Dr. Batchlor served on the executive leadership team of L.A. Care Health Plan, the nation’s largest public health plan. As chief medical officer, she was instrumental in developing a quality care delivery model, as well as health information technology, that expanded access and resources to more than a million individuals throughout the county.

Prior to L.A. Care, Dr. Batchlor served in leadership positions at the California HealthCare Foundation, the Los Angeles County Department of Health Services, Prudential Health Care, and Ross Loos Medical Group. Early in her career she served as a clinical instructor at the UCLA School of Medicine.

Martin Luther King, Jr. Community Hospital (MLKCH) is a private, nonprofit, safety-net hospital serving 1.3 million residents in South Los Angeles. Our new hospital opened in 2015 through a unique public/private partnership with the County of Los Angeles, the University of California, and other healthcare providers. MLKCH is committed to establishing an innovative model focused on patient-centered, coordinated care delivery, both inside and beyond the hospital walls. Learn more: www.mlkch.org

About The James Irvine Foundation