From homeless to healthcare

When he was homeless, he would sometimes sleep in his 1999 Camry near the roundabout of the old King/Drew Medical Center. It gave him comfort and a feeling of safety to look up at the imposing cement walls and think about all of the people inside of them whose job it was to take care of others.

Someday, Rakeem Addison thought, I want to be one of those people.

Today he is. Rakeem is now a Patient Care Technician at the Martin Luther King, Jr. Community Hospital (MLKCH). It’s been a remarkable journey for a man who once walked 11 miles to a job because he didn’t have money for gas. Where so much hardship might have hardened others, Rakeem emerged inspired to make the world a better place.

Today he plays music for his patients—mostly COVID patients these days—in their rooms. Brings them chargers for their phones. Talks to them when they are lonely, which given the necessary isolation of COVID treatment, they often are. Keeps a daily count of their smiles.

It’s also why he is part of a group leading this year’s MLKCH Gives campaign, the hospital’s annual staff giving campaign.

“I feel like the darkest stages of my life have motivated me to give,” Rakeem says. "You can actually save someone else or prevent something bad from happening. Giving—and receiving—can open up a lot of doors.”

Rakeem is speaking from experience. The child of Ghanaian parents, he spent time in the Carmelitos Housing Project in North Long Beach, until family troubles moved him into a guardian’s house. Like a lot of kids, basketball was the dream until it wasn’t. At 19, he was a father, working a part-time job that didn’t pay enough to live. A low point came on the day he made enough money to buy diapers, but not to eat.

Instinctively, he started to look for role models. On the MLK medical campus, he found them. “Honestly it gave me a different view of what my life could be.”

He started to read, spending hours at the local library. When the library closed, he’d take his book to the park, where the late-night reading light was strongest.

“I had to open up my horizon and give myself something to shoot for.” 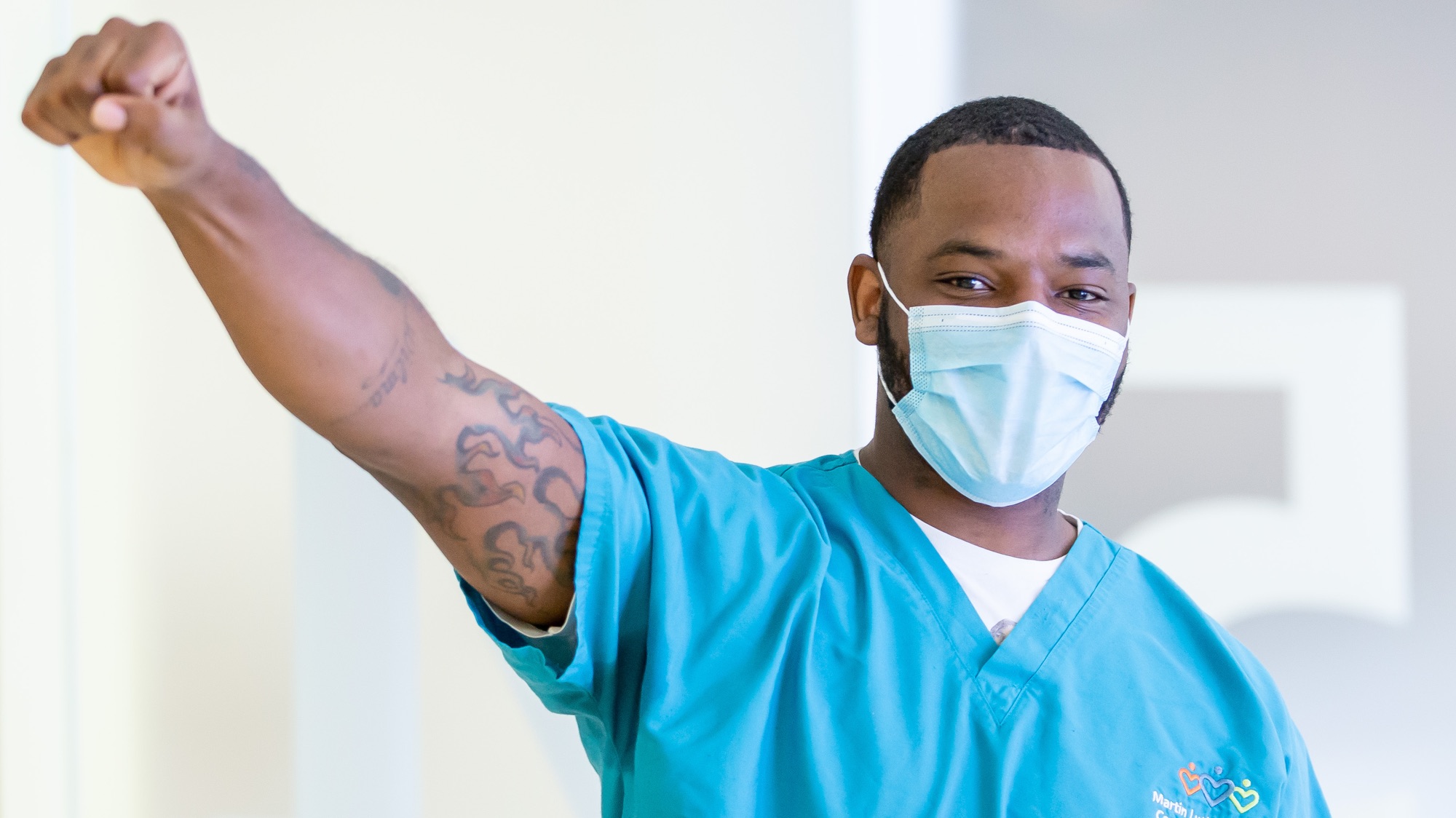 That ‘something’ was the announcement of a brand-new hospital opening near the site of the old one: the Martin Luther King, Jr. Community Hospital. Rakeem applied for and secured financial aid to complete a Licensed Vocational Nurse program. Then he, in his own words, “busted my way in.”

Wearing the only button-down shirt he owned, he walked into the light-filled lobby of the new hospital and asked to speak with someone in human resources.

It was his “Pursuit of Happiness” moment, Rakeem says, referencing the Will Smith up-from-the-bottom biopic.

“I just had to get it done,” he says. “I told them that I’m coachable, teachable. That I wanted to be part of the change.”

Today, Rakeem walks the 5th floor in his bright green scrubs, caring for some of the sickest patients in a community hard-hit by COVID-19. Outside of work, he has become a fixture in efforts to support at-risk and homeless youth. He supports local toy and food donation drives and charity events through his own nonprofit, the DJ RaRa Foundation.  Among other things, in early April, as COVID-19 cases were skyrocketing, that foundation organized a morale-boosting treat for MLKCH workers: free lunch, courtesy of the Cali-Caribbean food truck Grilled Fraiche.

Giving, he says, is redemptive.

“By giving back, we’re sowing the seed within someone to show them how to love,” Rakeem says. “When you understand the idea of living life on love versus survival, it’s so much greater and has so much more value.”