COVID-19 is a strange virus. And James Simpson’s battle with COVID is the strangest Dr. Jason Prasso has seen.

“We thought he was going to die,” said Prasso, a pulmonary and critical care specialist who oversaw James' care since the day he was admitted to the intensive care unit at the Martin Luther King, Jr. Community Hospital (MLKCH).

“His case has been a humbling experience. What it made us realize is just how unpredictable this disease is.”

James, 40, should be dead. During his time in the MLKCH intensive care unit, his lungs, kidneys, liver and circulatory systems all failed. There were serious discussions with his family about taking him off life support.

Instead, after two and a half weeks in a medically-induced coma, he woke up. He cried. The first words out of his mouth were for his caregivers.

ICU doctors and nurses are trained to manage their emotions, but even so, “I teared up,” said Maria Arechiga, one of James' nurses. “It was very touching.”

It is also a demonstration that even in a high-risk, highly vulnerable community, high-quality medical care can work miracles.

Death from COVID-19 is closely correlated with pre-existing health conditions. Those conditions—diabetes, asthma, obesity, heart disease—are often found in majority-minority places like South LA, which have suffered for years from too few doctors and a lack of healthy food outlets, education, and resources.

James Simpson is emblematic of the types of challenges many people in medically-underserved communities face. He is technically obese, with a prior history of chronic disease. At the time he fell sick, he was living in a group home, with little ability to socially distance himself from others. He is low income. He is African American.

His memory ends at the hospital’s front door. He woke up nearly a month later in the intensive care unit with IV lines plugged into his neck and a ventilator tube down his throat.

“It was so scary,” James recalled. “It was horrible.”

His caregivers do not disagree.

“I don’t think anyone thought he would make it,” said Maria, his nurse. “It makes it an even better feeling that he is where he is, and that we contributed to that.”

James was admitted to the hospital the day he came in. At first he stayed in a regular hospital room, monitored by nurses. On March 21—as often and inexplicably happens with COVID patients—he crashed.

“There’s just a lot of things that are curious about this disease,” said Dr. Prasso. “It can happen fast. It can happen slow. We have patients who have been in the hospital for a week and a half before they have to be intubated. We had a 36 year old patient in good health who was dead within 4 days. There’s no predicting it.”

James was rushed to the ICU and put into an induced coma, a common therapy used to relax the body and promote healing. He was intubated—a tube put down his throat and into his lungs—and his ventilator pushed to maximum oxygen settings. His inflamed lungs could barely take anything in.

Without oxygen, other organs began to shut down. His kidneys failed and he was put on dialysis. His liver failed. Then his blood pressure dropped critically. Doctors call it “multi-organ dysfunction syndrome” and the consequences are grim. More than 90% of patients die.

This patient’s care team, however, would not allow him to die, even if they found themselves mystified at times by the virus they were battling.

“You’d see him about to code and we’d have to quickly adjust his meds,” Prasso recalled. “If his circulatory system looked like it was about to collapse we would have to change the cocktail he was on to address the potential cause and that would stave off a cardiac arrest.”

Because COVID-19 is so unpredictable, this kind of improvisational, ultra-adaptive-care is necessary to keep hard cases from coding.

“It requires everyone to be on their A game at all times,” Prasso said. “But we have the best nurses that I’ve ever worked with. And we’ve been training for something like this for so long, never anticipating that it was going to happen. Then, when it hit, we were like a well-oiled machine.” 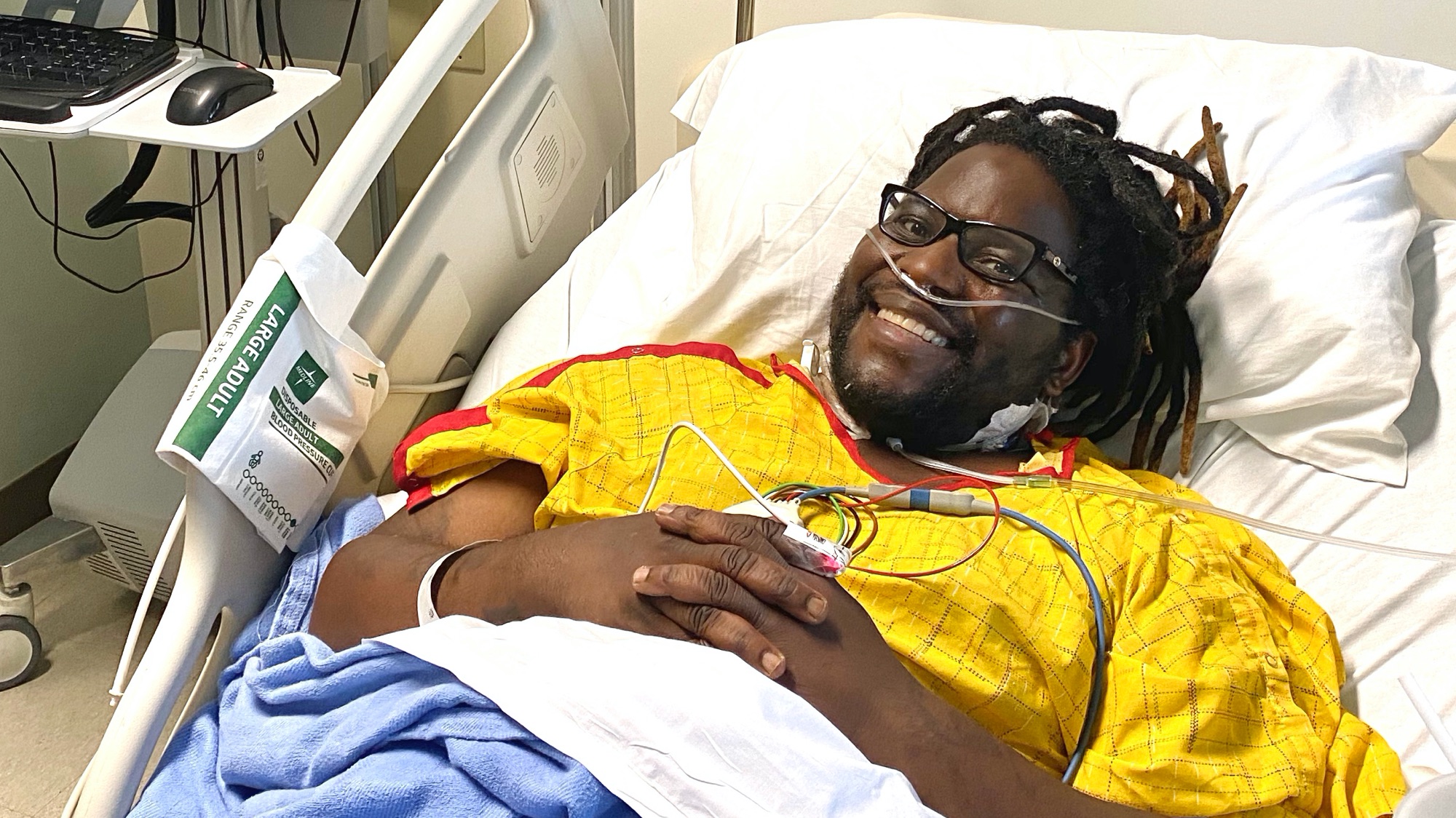 James Simpson, after two and a half weeks in the MLKCH intensive care unit

A common misconception of the intensive care unit is that it is a place where doctors and nurses heal patients. That’s not exactly true. Instead, advanced medical interventions are used to support failing organs, giving the body time to heal itself. MLKCH’s job, essentially, is to buy time.

James’ care team doggedly, relentlessly, kept him alive for two weeks. That’s an eternity in an ICU where the normal length of stay is less than a week.

Typically, two weeks without improvement is when doctors start talking to family members about end-of-life options. But there is nothing typical where COVID is concerned.

“They kept asking my mom, does she want to pull the plug?” James said. “She said no, I think he’s going to make it, let him live. Keep him on another week.”

James' care team kept him on the ventilator, although Prasso felt pessimistic about his patient’s chances.

“He just got better,” Prasso said. “That’s what’s so amazing. He was on maximum oxygen settings for two weeks and then, in the course of four days, he just came down.”

Those two weeks bought James Simpson’s body the time it needed to heal itself.

James' recovery was, in fact, astounding.  His blood pressure rose. The breathing tube was removed. He started physical therapy and was able to sit up, stand and eventually walk.

Unusually, his kidneys healed, which meant he wouldn’t have to endure dialysis for the rest of his life.

“We were all pretty excited to hear that,” Prasso said. “He really beat the curve.”

He may have been assisted by California’s aggressive efforts to “flatten the curve” through stay-at-home orders. Unlike New York, where health care providers were overwhelmed with patients, MLKCH and other California hospitals have seen far fewer COVID cases. Fewer cases mean more hospital staff, equipment and attention can be devoted to each patient. MLKCH’s mortality rate is a fraction of New York’s.

In fact, MLKCH’s mortality rate is in line with the state’s—approximately 4.8%. That’s remarkable given that South LA’s population has, with few exceptions, far worse health status.

“It shows that MLKCH is beating the curve as well,” said Alaine Schauer, senior director of the MLKCH Emergency Department and ICU. “Our patients are sicker and more complex, yet we’re keeping them alive at rates that are comparable to the rest of California.

“It says a lot about what high-quality care can do, even in hard places.”

James left MLKCH 35 days after he arrived. His recovery will be long—Prasso said that for every day a patient is in the ICU they should anticipate a week of recovery at home.  And scientists still do not have enough data to understand the lingering after-effects of COVID.

For James, it is enough for now that he survived what seemed unsurvivable. He attributes this to the care he received at MLKCH.

“I love MLK,” he said. “They got good nurses up here, the goodest doctors up here, treating you real nice. They brought me back to life.”