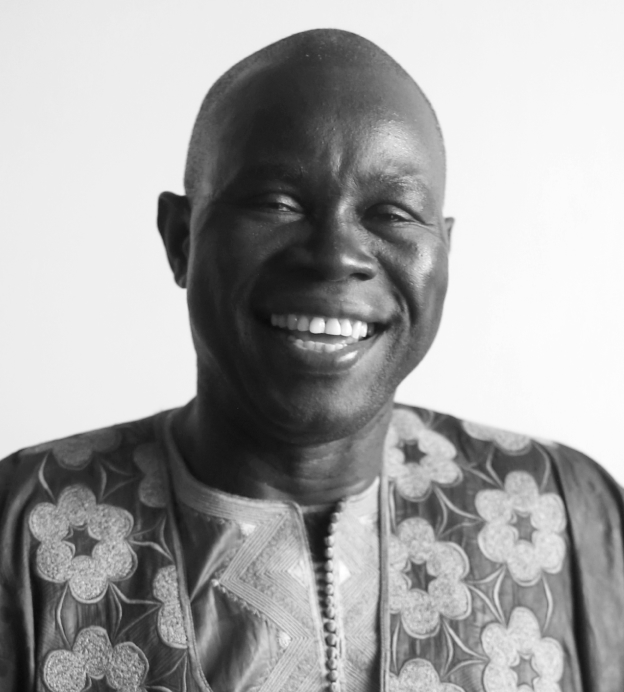 Aziz Diagne is a self-taught multimedia artist from Senegal and founder of Aziz Gallerie, a fine arts gallery in Leimert Park Village dedicated to underrepresented artists. In addition to watercolors and oils, Aziz produces collagraphs—multicolor prints produced from carved illustrations using a printing press of his own design. Aziz is most well-known for his dynamic mastery of Theissoise—a detailed and painstaking technique of reverse painting on glass. Through his dynamic talents, he has established himself as one of the premier contemporary glass painters.

Aziz has traveled extensively throughout Africa, Europe, and South America, absorbing the art and cultures of diverse environments. These experiences have greatly enhanced his limitless repertoire and creative energy. Rich in symbolism, Aziz's work captures the spirit and ambiance of the universal experience.

​Among his many accomplishments, Aziz was selected by the National Black Arts Festival to create advertising materials, including the huge festival billboards and banners that decorated the city of Atlanta during the two-week event. He was selected in 1995, 1998, and 2003 as the official artist for the New Orleans Jazz and Heritage Festival, one of the most widely attended international festivals. In 1995 and 2002, Aziz was commissioned by the Los Angeles Department of Cultural Affairs to create a commemorative poster for the 10th anniversary edition of the African Marketplace. His works have appeared on several compact disc and book covers for the University of Auburn (St. Martin Press). Aziz was the commissioned artist for 1996 Olympic Games Cultural Olympiad.

With no medium off limits, Aziz also acts. He appeared in the movie, “Antwone Fisher,” directed by

Denzel Washington. He has held acting roles in the HBO series “Insecure” and appeared on “The Carol Duvall Show” on HGTV.

Aziz has also been a featured artist at the National Arts Festival, Essence Musical Festival,

Find his work at ongoing exhibitions at La Belle Gallery in New Orleans and the Joyce Gordon Gallery in Oakland.