Love and lifelines lead from poverty to MLKCH

Sometimes people come into your lives at just the right moment. When you are struggling with drugs or alcohol. When you are anxious or depressed.

Sometimes when you are just two weeks old.

PK Fonsworth’s adoptive grandmother, Ethel Watanabe, was 65 when she was presented with the two-week old boy and given the life-changing choice to raise him.

“I still don’t know why she did it,” says Dr. Fonsworth, a brilliant student who received degrees in Spanish and molecular biology, was named Chief Resident at Harbor-UCLA, and completed a fellowship at UCLA before coming to MLKCH as the hospital’s first addiction psychiatrist. “We really changed each other’s trajectories, 100%.” 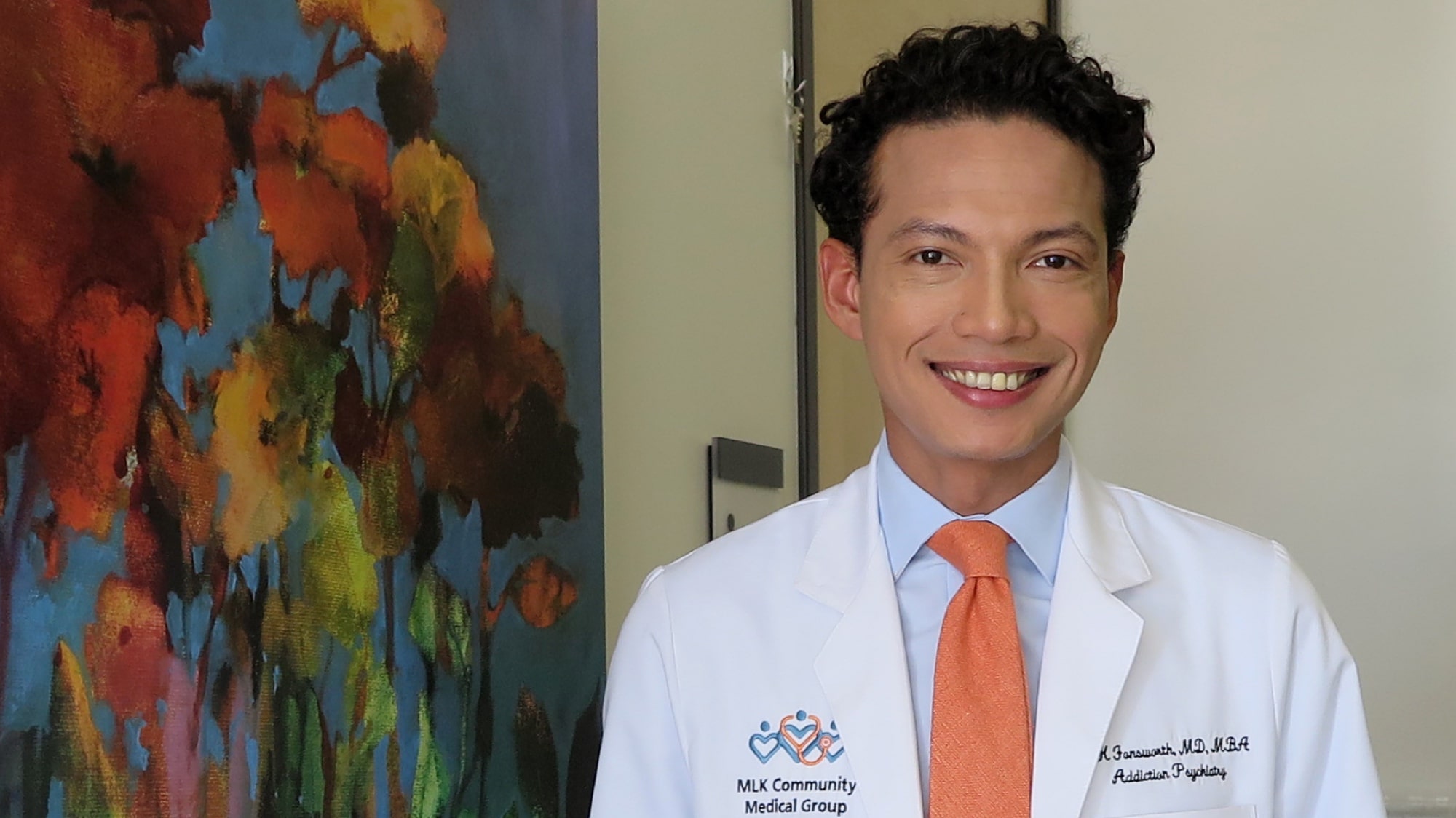 It was the 1980s in the Philippines, a world away from South LA. Ethel was a Japanese American who owned a beauty salon. PK’s biological mother was a local woman who could not care for her child and felt he deserved more.

Ethel threw a lifeline and adopted the child.

What followed was a two-decade testament to love, devotion–and struggle–that set the young boy on the path from poverty to the highest pinnacles of education and achievement.

It’s what motivates Dr. Fonsworth today to care for South LA residents struggling with addiction and mental illness, as well as a host of complicating factors: homelessness, poverty, lack of education.

“There’s a part about being at MLKCH that is not my first rodeo,” says Dr. Fonsworth. “I know about adversity.”

"No matter what it takes"

At age 10, PK and his adopted grandmother moved to the United States, expressly so that he could have better educational opportunities.

Ethel had a plan.

“The goal was college—no matter what it takes,” Dr. Fonsworth says. Specifically, the goal was a full scholarship because by then his grandmother was in her 70s and living on a small social security check and what PK could make from after-school jobs. “It was magical thinking,” Dr. Fonsworth recalls. “But she was determined.”

The two lived in a one-room converted garage behind a house. There was ivy growing through the windows. There was no money for vacations or after-school sports or even new clothes for school. But as a kid unaccustomed to better, and in the care of a loving soul, it didn’t seem terrible. “It wasn’t until later in growing up I realized that those were not ideal circumstances,” he says.

More lifelines were thrown. A cashier at a local Safeway noticed the young boy and his grandmother shopping and offered them a ride home. When she saw how they were living, she decided to help, first by buying groceries, and later by becoming the equivalent of PK’s second family.

Then PK found out he would be receiving a full scholarship to the University of California at Berkeley.

Then his grandmother was diagnosed with cancer.

She died when he was a freshman at UC Berkeley. But before she died, she knew that she had succeeded in her near two-decade quest to put her grandson on a path to success.

“College…was for her really kind of like the transferring from one kind of mother to another. She was able to give me over to an actual alma mater, ‘a nurturing mother,’ knowing I had a future.”

If you are someone who has grown up in extreme marginalization, you may feel that this is how the world works. That you don’t deserve better care. The good news is that there are people who care very much and are dedicated to this population.

Today, Dr. Fonsworth’s mission is to give others the same chance.

Addiction psychiatrists are few and far between. Dr. Fonsworth says only a few—two to six—graduate each year in Southern California, a geographic area of 24 million inhabitants. In South LA, birthplace of the crack cocaine epidemic in the 1980s, the effects of which are still being felt today, he is one of a small handful of psychiatrists who specialize in the treatment of addiction. He may be the only bi-racial (his father was an African American service member) addiction psychiatrist in South LA who speaks Spanish fluently.

“For me it’s an opportunity to work with the underserved. It’s an opportunity to speak Spanish every day,” says Dr. Fonsworth. “And from my own experience of moving between two worlds—privileged and not—I have a sense of this community. My background and training deeply informs how I care for people.”

South LA has Los Angeles County’s highest rate of drug or alcohol-related overdoses, the second highest rate of binge drinking and misuse of prescription drugs, the highest marijuana-related emergency department visits for youth and young adults. It also has a dire shortage of providers compared to more affluent areas. Psychiatrists are in even shorter supply. By 2028, California is projected to have 41% fewer psychiatrists than needed, especially in underserved areas like South LA.

Dr. Fonsworth’s message to his patients: he is here.

“If you are someone who has grown up in extreme marginalization, you may feel that this is how the world works. That you don’t deserve better care. The good news is that there are people who care very much and are dedicated to this population.”

He relates it back to his grandmother, to the lifeline she extended to him so many years ago.

“To be a lifeline to other people, as an addiction psychiatrist, that is very much coming from a deep place of me.”