Dr. Myron Hall is a doctor of podiatric medicine (DPM) and the newest physician specialist to join the MLK Community Medical Group. He began seeing patients at the Rosecrans clinic in February 2018.

When asked what led him to practice podiatry with the Martin Luther King, Jr. Community Hospital and its affiliated medical group in South Los Angeles, he credits his mother.

"My mom was always an ear for me to talk to, my prayer warrior. She was my best friend and inspiration,” says Dr. Hall. "As the son of a single-parent mom, I was determined to pave my own way to make things easier for her and represent the values which she taught me." 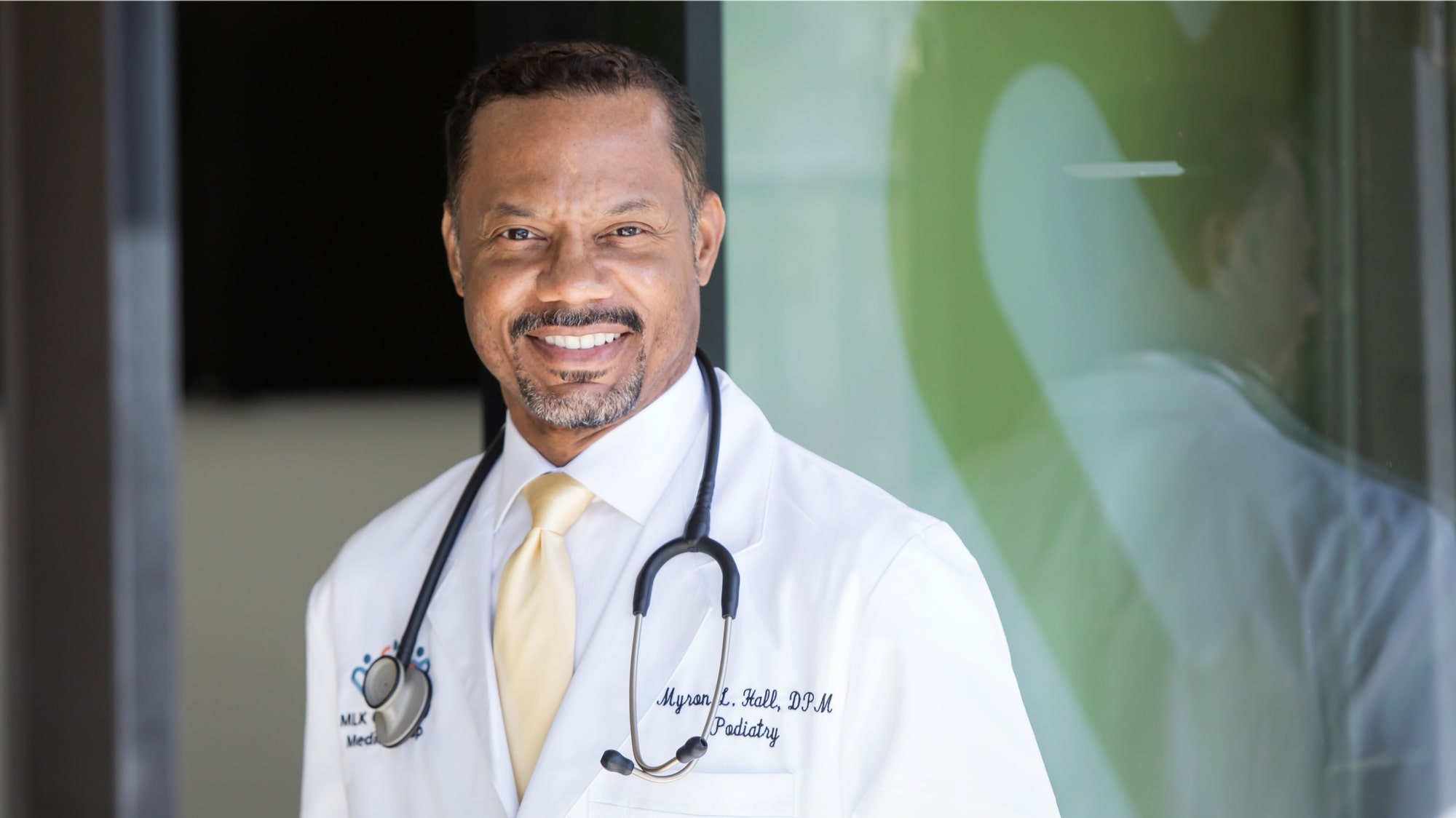 Dr. Myron Hall didn't dream of growing up to become a podiatrist. As a talented football and basketball player, he wanted to become a professional athlete. But it was the military that offered him a clear and promising path forward. After receiving a congressional appointment to the U.S. Naval Academy, he embarked on a seven-year, highly decorated career as a naval officer.

That path—along with the dream of being a professional athlete—closed to him after an ankle injury. The injury and its post-surgical complications led to his honorable medical discharge from the Navy.

Where many people would be discouraged by such a setback, Dr. Hall was inspired.

He developed a passion to learn about traumatic injuries to the foot and ankle and set off to study podiatric medicine at Temple University where he excelled and graduated with multiple honors.

From Beverly Hills to South LA

"I ventured out into private practice to serve people like my mother," he says. "My mother always told me, 'Don't focus on making money and remember to give back. Don't forget about your community.'"

He joined the staff at Cedars-Sinai and set out to build a private practice, doing house calls all over Los Angeles, from Beverly Hills to Compton to the South Bay.

Then, about two years ago at a medical association event, he met Crystal Lee, physician relations manager at Martin Luther King, Jr. Community Hospital. She told Dr. Hall of the hospital's mission and vision to create a community of health and wellness in South LA, and she shared the hospital's need for a podiatrist to support patients with diabetes.

He just happened to have his résumé in the car.

The Martin Luther King, Jr. Community Hospital offered Dr. Hall the chance to do something he’d been wanting to do—practice medicine in a community where he could also have a bigger role as that of an educator, leader, and mentor. 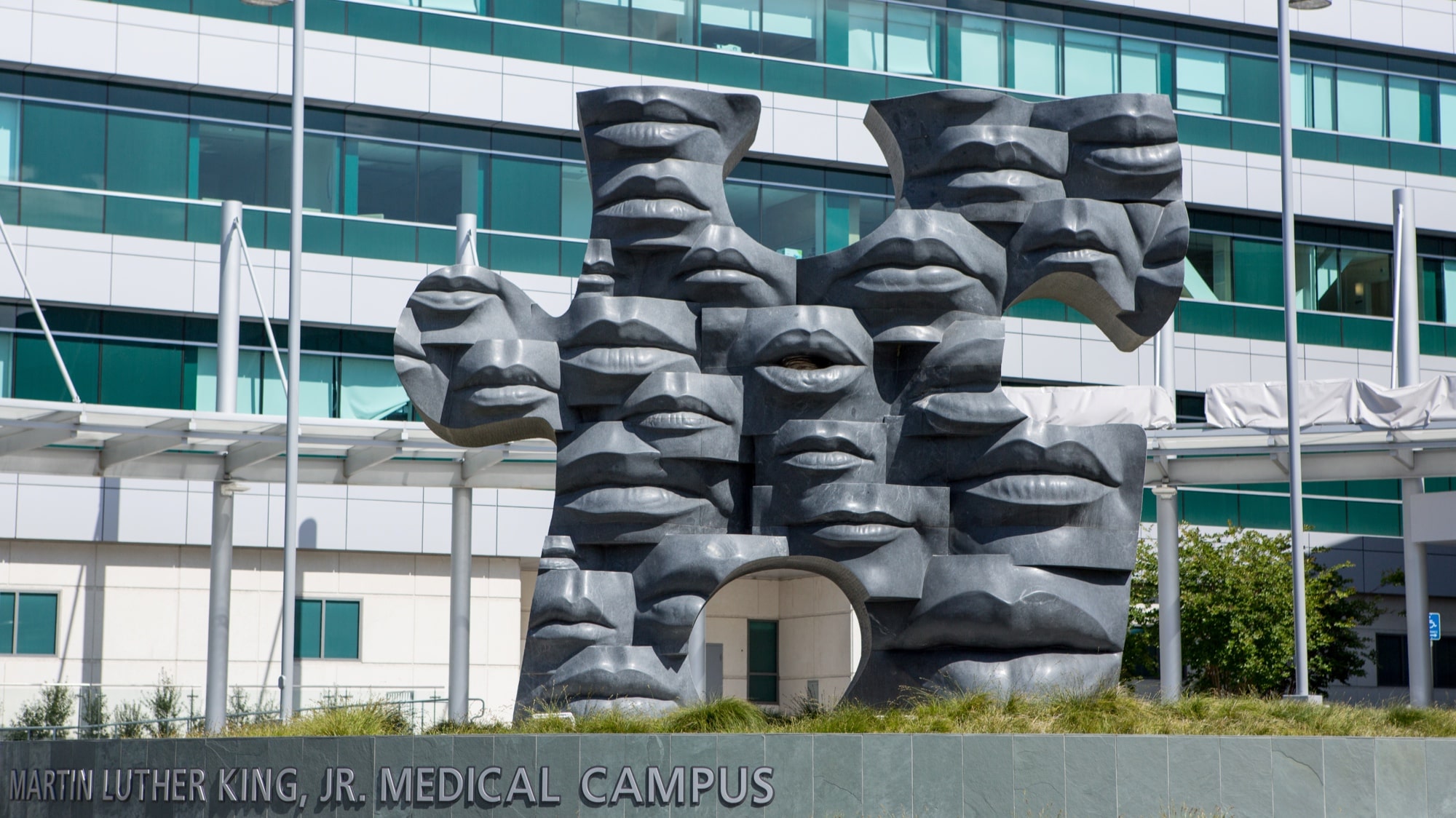 When I was heading in for my second interview at MLKCH, I called my mom, was standing in front of the puzzle sculpture in the driveway and I called her and said, 'I just realized that this hospital is the piece of the puzzle for me in my life.'

Most people in South Los Angeles have gone without a primary care doctor for many years due to the area's physician shortage—including those with chronic health conditions such as diabetes. And most diabetics, Dr. Hall explains, don’t know about the risks to the feet.

As a highly trained African American doctor, he explains, he felt compelled to give back as his mother had encouraged him to.

"It wasn't a coincidence that I received the offer before she passed," he says. "She knew that what she encouraged me to do would be fulfilled. It was a big thing for me to share with her."

Staying connected to patients is important to Dr. Hall because that’s how he ensures they’re healing safely and following their self-care instructions. Last year, more than half of the patients discharged from the hospital said they had no doctor to see for follow-up. With regular office hours in South Los Angeles, Dr. Hall proudly helps fill that gap.

“Patients are happy we’re here," says Dr. Hall. "Having their own doctor gives comfort to people; they feel safe and cared for. That’s invaluable."

"I'm more than happy, I'm blessed," says Dr. Hall. "When you're blessed, you know that you're doing more than helping yourself, you're helping other people. I'm doing something I love and I'm passing it on."