Willowbrook, Calif. Oct. 22 – Elaine Batchlor, the doctor who gained national attention for her efforts to bring a high-quality, state-of-the-art hospital to one of the most underserved communities in the country, has been elected to the National Academy of Medicine.

The peer-nominated recognition, announced on Oct. 21 during the academy’s annual meeting in Washington, D.C., is considered one of the highest honors in the field of health and medicine.

Batchlor is the CEO of Martin Luther King, Jr. Community Hospital, a safety-net hospital that serves the historically underserved area of South Los Angeles.  Since its opening in 2015, MLKCH has received accolades for its high patient satisfaction levels, cutting-edge technology, and commitment to providing high quality healthcare both within and outside the hospital’s walls.

“I’m humbled and also proud of what we have accomplished in South LA,” said Batchlor. “This honor is proof that a committed group of people, with excellence as their single-minded goal, can achieve great things in even the hardest places.”

South LA was without a hospital for seven years after the closure of a public hospital in 2007.  This loss compounded a medical provider shortage, social and economic disparities, and other obstacles to care that has led to some of the worst health outcomes in the nation. 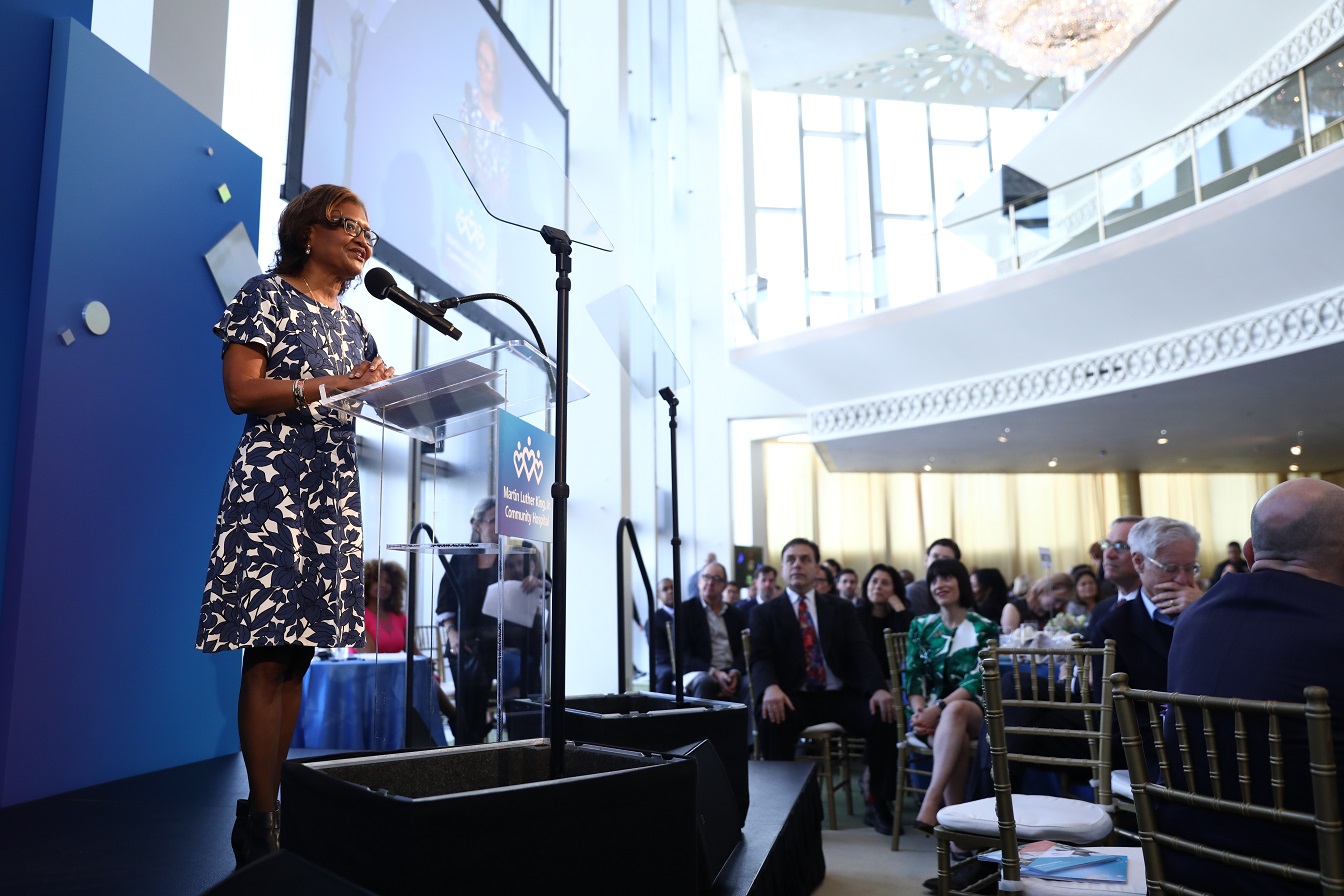 Medicaid in California pays one of the lowest provider reimbursement rates in the nation, resulting in a severe doctor shortage in places like South LA.

“A lot of people told us we’d never get high-quality doctors to work at Medi-Cal rates,” said Batchlor.  “We thought outside the box and came up with some innovative solutions to fund the gap.”

Innovation
Among those solutions were innovative partnerships with LA County and UCLA and the state, as well as the help of philanthropic powerhouses such as former Microsoft CEO Steve Ballmer Group, the Weingart Foundation, the California Endowment and LA Care.

The result was not just a hospital staffed with doctors from some of the nation’s leading academic centers, but a new non-profit medical group – the MLK Community Medical Group – created to prevent and manage South LA’s epidemic of chronic disease.

In addition, Batchlor staffed a population health department to do health education, screening and outreach in the community. The hospital has also been recognized for its cutting-edge technology, low C-section rates, and top safety ratings.

Batchlor, a native of Maryland who received degrees from Harvard, Case Western Reserve, and UCLA, received numerous accolades and awards for her focus on excellence.

“The goal is not just to provide adequate care, but to provide care that is on par with hospitals in more affluent areas,” Batchlor said.  “This vision seemed extraordinary to some, but it was mandatory for me.”

Earlier this year, Batchlor was honored with the 2019 Irvine Foundation Leadership Award, which recognizes “innovative, effective leaders whose breakthrough solutions to critical state challenges improve people’s lives, create opportunity, and contribute to a better California,” according to the Foundation.  She also received the 2019 Partners in Care Vision & Excellence in Healthcare Leadership Award.

Prior to MLKCH, Dr. Batchlor served on the executive leadership team of L.A. Care Health Plan, the nation’s largest public health plan. As chief medical officer, she was instrumental in developing a quality care delivery model, as well as health information technology, that expanded access and resources to more than a million individuals throughout the county. She also served in leadership positions at the California HealthCare Foundation, the Los Angeles County Department of Health Services, Prudential Health Care, and Ross Loos Medical Group. Early in her career she served as a clinical instructor at the UCLA School of Medicine.

New members of the NAM are elected by their peers in recognition of outstanding achievement and their contributions to health and society.